During the last few days of my month-long adventure through the North-west I drove along U.S. Highway 2 which parallels the Canadian Border. My plan was to end my trip as I began by visiting historical forts, battlefields, and other points of interest.

After a night off the road at a motel in Haver, Montana I made a stop at the site of the Battle of Bear Paw south of Chinook, Montana. The Bear Paw battlefield is where a band of Nez Perce led by Chief Joseph was cornered by U.S Cavalry units just 40 miles south of the Canadian Border.  At his surrender, Chief Joseph said: “Hear me my chiefs!  My heart is sick and sad. From where the sun now stands, I will fight no more forever.”

The battle in September, 1877 ended a 4 month, 1,500 mile flight to freedom after the band was forced to give up its native homeland in what is now Idaho and move to a much smaller reservation.

My other destination was the confluence of the Yellowstone and Missouri Rivers.  For years I have read epic tales about mountain men as well as the Lewis and Clark expedition. In each one of those real and fictional accounts, the place where the Yellowstone meets the Missouri is an important setting.

The partially reconstructed Fort Union Trading Post National Historic Site is located at that confluence at the North Dakota/Montana border 25 miles south of Williston, South Dakota.  The original fort stockade was built in 1828 or 1829 and financed by John Jacob Astor’s American Fur company. The literature describes the imposing white washed Fort Union as the most important fur trading post on the upper Missouri until 1867. Historic visitors included mountain men Jim Bridger and Hugh Glass, and wildlife and landscape artists John James Audubon, George Catlin, and Karl Bodmer.  The Joslyn Art Museum in Omaha holds extensive collections of work by both Catlin and Bodmer.

A short distance from Fort Union is Fort Buford State Historic Site which I had never heard of until I was looking for a campsite. Fort Buford was commissioned in 1867 to protect river and overland routes and to protect survey and construction crews for the Great Northern Railway.  Some of the soldiers garrisoned at the fort were, “Galvanized Yankees.”  Galvanized Yankees were ex-Confederate soldiers recruited from Union prison camps and sent to the frontier to protect the trails, telegraph lines and U.S. Mail routes.

In July, 1881 Chief Sitting Bull and about 35 families who were near starvation crossed  U.S. border from Canada and gave up their arms and horses. In a formal surrender ceremony the following day, Sitting Bull gave up his Winchester rifle to his son Crowfoot who surrendered it to Major David H. Brotherton.

The Bismarck Tribune reported that at his surrender Sitting Bull said: “ I surrender this rifle through my young son…I wish it to be remembered that I was the last man of my tribe to surrender my rifle. This boy has given it to you, and he now wants to know how he will make a living.”

Another account is that the Lakota chief told the eight year old boy, “ My son, if you live, you will not by a man, because you will not have a rifle or pony. Give my rifle to the Major and tell him I am the last Lakota to surrender.”

I also spent some time wandering through the Fort Buford cemetery. The restored wooden grave markers include the cause of death as well the date. Far more soldiers and civilians laid to rest in the cemetery died from diseases and afflictions than from bullets and arrows.

So ends my June journal of my Northwest Adventure. Thank you again to all who have followed my journey and for the many kind comments.

Tepees stand outside the back gate of Fort Union where Indian encampments might have been located. The back gate was the exit point to the trails and prairie beyond the fort. 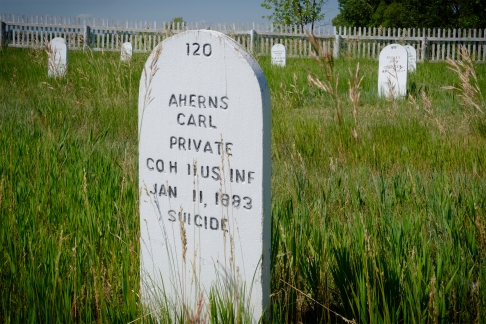 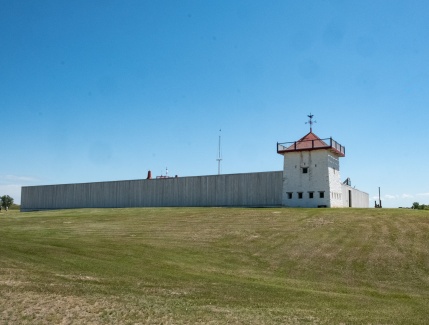 Fort Union view from the prairie.

Teacher parade through neighborhoods in Arlington and Kennard.
Fort Calhoun, Kennard, Blair fire at Lake Arrowhead for ice rescue training.
The best thing I did on Veterans Day was make this picture of WWII Navy Veteran And true CORNHUSKER Ted Martin. Ted has competed in state and national hand cornhusking contests for many many years.
Roz in autumn light.
Bye, bye butterfly!
Moo