After reading “The Oregon Trail A New American Journey” I knew where my next road trip would take me. The book is the story of the author Rinker Buck’s,  “crazy ass passion” to make the first unassisted covered wagon crossing of the Oregon Trail in over 100 years. I was totally captivated by the personalities of Brinker Buck, his brother and sidekick Nick, Nick’s dog Olive Oyle, and the three mules. The writer’s theme of  “journey as destination,” and learning to find comfort in living with uncertainty resonates with me.

I have traveled west on I-80 countless times but seldom leave the Interstate for the scenic and historic byways that follow the old Oregon Trail through Nebraska and into Wyoming.  In early September I decided to remedy that.  I don’t have a 19th century covered wagon and mules, but I do have my Wander Wagon – a pop up pickup camper and Tacoma pickup truck.

After a 350 mile drive from Blair I found a secluded campsite on a sandy beach at  Lake McConaughy just before sunset. The next day I set out to view some of the landmarks Buck describes in his book.

In the 1840’s through the 1860’s, thousands of covered wagon immigrants crossed the South Platte near Brule and  climbed the steep hill which came to be known as California Hill heading for the North Platte and Ash Hollow.  A marker on Highway 30 marks the site and by traveling ¾ mile on a minimum maintenance road, the deep ruts left from the wagon wheel can still be seen. From the top of the California Hill one can see a panoramic view of the South Platte river valley and  the stream of traffic moving along Interstate 80.

Following the ridge line for about 20 miles,  the wagons would make a steep dissent down what came to be known as Windlass Hill to Ash Hollow.  Ash Hollow provided the emigrants access to fresh spring water and lush grass for livestock and an opportunity to mend harness and wagons before moving on.

Highway 92 from Ogallala to Scotts Bluff and into Wyoming parallels the old Oregon trail.  I think I felt a bit of the excitement that the pioneers might have experienced as the terrain changes and  Jail House Rock and Court House come into view on the horizon. 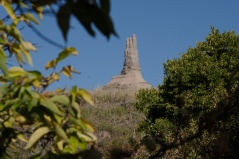 Chimney Rock was among the most notable landmarks recorded in diaries and sketch books by pioneer travelers along the Oregon Trail.

Deep ruts made by thousands of wagon wheels can still be seen on California Hill in western Nebraska between Brule and Big Springs.

Rachel Pattison was one of thousands who died of cholera due to contaminated water along the Oregon Trail. The headstone was hand carved by her 23 year old husband Nathan Pattison. The grave marker and can be seen in the Ash Hollow Cemetery. Rachel was 18 years old. Her husband traveled on to Oregon and then Washington and never remarried. 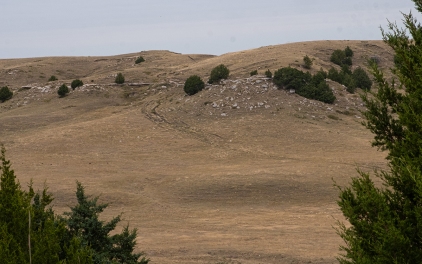 Deep ruts carved into the hillside by thousands of wagons making the descent to Ash Hollow can still be seen on Windlass Hill.

One thought on “In Search of the Oregon Trail”