Ten years ago this week on June 30, 2010 the Dana Board of Regents and Dana Corporation abruptly announced that the 126 year old Lutheran institution would permanently close.

As photographer for the Enterprise newspaper I had regularly visited the campus to photograph the annual Sights and Sounds of Christmas, picturesque seasonal campus landscapes, and occasional sports, concerts, homecoming and other Dana events. One of my favorite subject for photo compositions was the Little Mermaid that greeted students along the walkway to the Durham Center. I have photographs of that little bronze statue in winter spring and fall from just about every vantage point that you can imagine. The statue was removed after the college closed.

During the days following the closing announcement, I was on campus to document the impact on the students, the faculty and staff and the community.

While the news  of the closing came as a  shock, it was not without warning.  Everyone associated with the school thought the campus had been saved when the Board of Regents announced in March that the campus would be sold to a non-profit. The Dana Corporation  had pledged keep Dana’s faculty and programs in place while working to double the enrollment to 1,000 students. Following the announcement of the sale, I was on campus to photograph and report on the reaction of students to the proposal.

Students Lindsay Fibranz and Brittney Naseman said they saw the change as a positive one, but they would like more details.  At the meeting they were told that the change would lead to more students, and the old dorms would be fixed up.  “For the future of the school, I think it’s good,” Lindsay said.

While not everyone in the community was comfortable with the idea of the school becoming a for-profit institution, pretty much everyone agreed that it was the best option available.  The transition appeared to be moving along as expected until the  news on June 30, that the plan was rejected and the school would close immediately.

Over the 2010 Fourth of July weekend I wandered the eerily quiet campus takin photos of campus landmarks.

One week after the announcement, managing editor Doug Barber and I drove to Midland College in Fremont to attend an information session and open house for  prospective former Dana Students. As we walked from the parking lot, I remember two distinct sensations.  The first was that the Midland  campus could not compare to the natural beauty of the Dana campus. The other was that Midland was buzzing with life, energy and activity and Dana was not.

In addition to leaving Dana faculty and staff without jobs, the school closing left the Danish American Archive Library (DAAL) without a home.  On the following Saturday an army of more than 100 volunteers and a fleet of cars and trucks transported the critical contents of the archive to temporary storage at Professional Forms Inc. in Blair.  The Archive also lost as much as $4,000 in endowment funds held by the college.

Less than two weeks after the closing announcement and one day before the school was officially closed, the Blair and Dana Community gathered at First Lutheran Church to bid the college farewell.

On that Sunday evening, members of the Blair and Dana College community  filled the Life Center at First Lutheran Sunday evening to sing, tell stories, pray and just be together in the wake of the closing.  As the service concluded, ushers lit candles  and former chorus members were invited to come forward and lead the gathering in an emotional rendition of Hail Dana.

The following day, Dana College was officially and permanently closed. 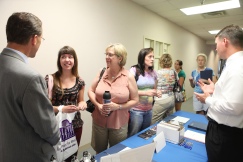 Tara Mesward and her mother, Debra, Soeak with a Concordia College representative . 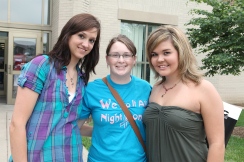 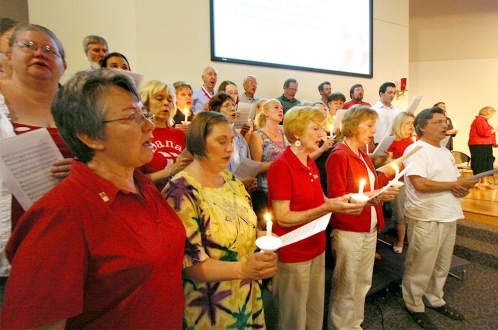 The blair and Dana community gathered at First Lutheran Church to bid farewell to Dana.

Bob Krogh and Sandra Ort Jensen tape a box of documents for transport. 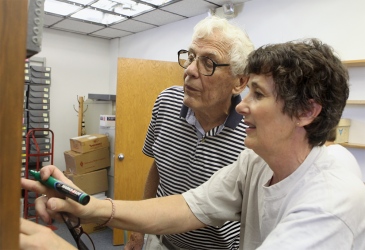 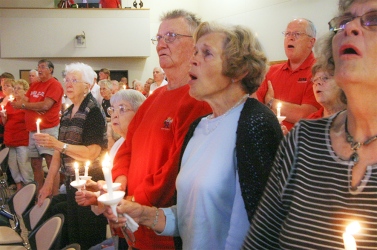 The Blair and Dana community gathered at First Lutheran Church.

The Blair and Dana community gathered at First Lutheran Church to bid farewell to Dana College.

Bronze statue of the Little Mermaid. 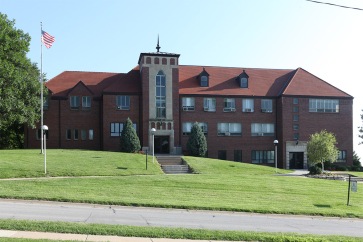