I purposely waited until the end of my trip to visit Glacier National Park hoping that Going-to-the-Sun Road would be open.  The park service never lists a specific opening date because of the unpredictability of heavy late spring snowstorms.  Maintenance crews begin in April to remove  the 80 or more feet of snow that covers Logan Pass during the winter. Generally the road opens in late June to early July and closes with the first heavy snow in October.  Forest fires in the past two years have caused the road to close in September.

Construction of the monumental engineering project began in 1927 and was completed in 1932. The Sun Road, as it is sometimes called, is a National Historic Landmark. Driving along the narrow road, gazing up at lofty peaks and waterfalls and down over the steep canyon walls gives me more thrills than an amusement park ride.

This year the road was scheduled to open June 22, but remained closed due to dense fog and clouds. The road opened the following day, but clouds and intermittent rain showers persisted.  Several times I tried to take some moody photos in the mist and rain, but the mountain tops were hidden in clouds. Overnight the skies cleared and before dawn I packed my gear and drove along the Sun Road to photograph those incredible mountains and valleys before heading toward home.

Going-to-the-Sun Road links West Glacier and Apgar Village on the west, and St. Mary and Many Glacier to the east.  The west side of the park attracts the largest share of visitors and offers many more amenities.  In Apgar village and the town of West Glacier just outside the park there are many gift shops, restaurants and equipment rental shops.  A tour boat on Lake McDonald and the historic Lake McDonald Lodge are also popular attractions.

On the east side of the park, the scenic glaciers and access to high country trails are the main attraction.  Many Glacier also features the historic and picturesque Many Glacier Hotel.

If you have your passport with you, visiting Waterton on the Canadian side of the Waterton-Glacier International Peace Park is definitely worth the hour drive from St. Mary. The historic 90-room Prince of Wales Hotel sits high above Lake Waterton and looks something like a set from a Harry Potter movie. The hotel was built in 1927 and still retains that last century old world flavor. The hotel offers picturesque views of Lake Waterton and the towering peaks beyond.

An area of Glacier National Park that is off the beaten path is the rugged and authentically rustic North Fork of the Flathead river on the northwest boundary of the park.  The entry point for the remote lakes and praries is the community of Polebridge and the Polebridge Mercantile. The Merc was built in 1914 and is listed on the National Historic Register of Historic Places.  The store is well known for bakery items – particularly its huckleberry bear claws and rolled fresh bread sandwiches. It also sells handmade crafts and souveniers.  Next door to the Merc is an old cabin that is the home to the Northern Lights Saloon where backwoods enthusiasts gather to share stories of the days exploits.

Mid to late June is a great time to visit the Park if you want to avoid heavy traffic and crowded trails.  The problem is that you may find many  of the high country trails closed until the end of June due to heavy snow and the shuttle buses do not begin operating until July 1.  I enjoyed my week in the park and look forward to a return visit.

A vehicle approaches an arched bridge across a water fall on Going-to-the-Sun road in Glacier National Park.

Bear Grass blooms among burned timbers along Going to the Sun Road.

Wild flowers bloom on the Round Prairie in the North Fork region of Glacier National Park.

Wildflowers along the north fork of the Flathead River.

Due to the dense fog, Going-to-the-Sun Road was closed to motorists but open to hikers and cyclists.

Historic Prince of Wales Hotel overlooks Waterton Lakes on the Canadian side of Waterton-Glacier International Peace Park. The union of the two parks was achieve in 1932. 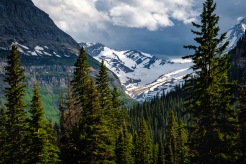 Heavy clouds and fog obscured the mountain view along Going to the Sun Road in Glacier National Park. 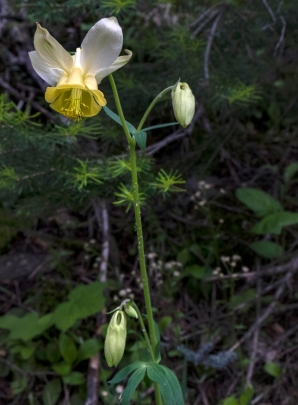 Spring Wildflower along Going to the Sound Road

Historic Prince of Wales Hotel overlooks Waterton Lakes on the Canadian side of Waterton-Glacier International Peace Park. The union of the two parks was achieve in 1932.

A rainbow appears through a misty rain behind the remains of burned trees from the 1915 Reynolds Creek fire in Glacier National Park. 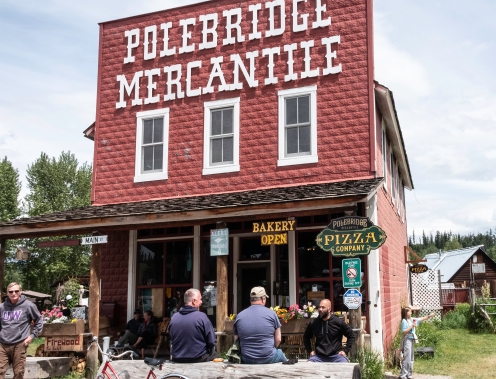 The historic Polebridge Mercantile is a magnet for back country enthusiasts looking for a huckleberry bear claw and good conversation.

One response to “Spring time in Glacier National Park”